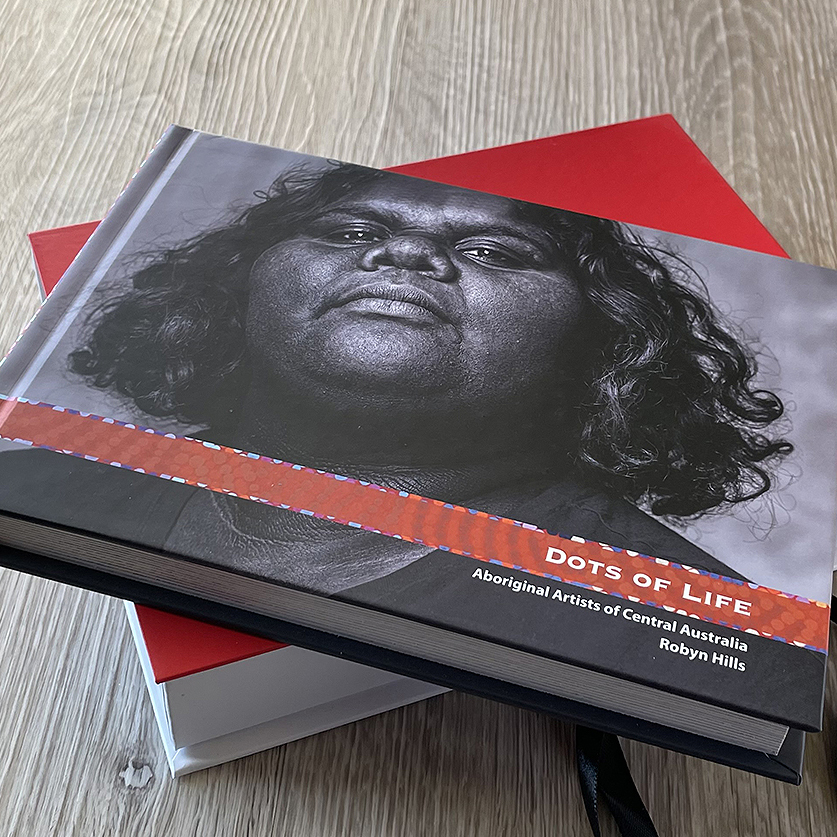 Many dots link together in my life to bring this project into being. Since I was a small child, I’ve always been fascinated with wanting to live with Indigenous Australians and appreciate their artwork. Five years ago I was fortunate to be accepted into the Warlukurlangu Artists Aboriginal Corporation volunteer program. That meant travelling from my hometown of Caloundra, Qld, down to Brisbane, then 3,000km by air to Alice Springs, then another four hours by 4WD on a dirt road out to the edge of the Tanami Desert to Yuendumu, NT, in Central Australia.

When the art centre manager, Cecilia Alfonso, learned that I was a professional photographer, she asked me to create a portrait of each artist. These would be used to update their website and for their social media posts. The portraits would also be placed on their Certificate of Authentication when the artists sold a painting. Taking large cases of cameras, lighting equipment and tripods to a remote location was a challenge, including transporting it safely so it didn’t get damaged but also keeping it free from the fine red desert sand that gets into everything.

A consistent background was needed so the set of portraits looked cohesive. I wanted the artists’ faces to project from the background, but also for the background to be a supporting element that was connected to their painting practice. From the storeroom, I selected a large black canvas that had been prepared ready for the artists to paint on – the brush strokes would give texture in the photograph and the darkness of it would complement the artists’ skin tones. Other backgrounds used in following years included a packing box from returning artwork that had been exhibited in Paris, as well as walls of the centre that were decorated with Jukurrpa (Dreaming Stories).

The artists were invited to sit on the same stool, each the same distance from the background. No other direction was given to them. It was to be a documentary portrait of historical value – capturing their features, clothing (I noticed that often the bright colours in their paintings were the same colours as their clothing), artistic hands and looking directly into their eyes. The younger artists were quick to smile, more used to being photographed.

The main light on the artists’ faces was a studio light, with the shadow side illuminated by a silver reflector, also giving highlight detail in their eyes. Light was also directed to spill onto the background to capture the texture on the canvas and give depth to the portrait. I slowed down the shutter speed on the camera to register any ambient light. I wanted a collaboration of what we each brought to the portrait process – some of the light the artists use to create their masterpieces, and some of my light to make the portraits powerful.

This is a collection of portraits – at first glance quite similar, yet I encourage the viewer to find the subtle differences in each character and dive deep into the eyes of these artists. I wanted to create portraits that stood the test of time.

The artists were photographed in what they happened to be wearing that day. These portraits are a document of their everyday look. The art centres are very casual, with dogs and children about, so if they also walked into the frame, they were included in the portrait. There is paint on the artists’ hands and clothes, some tea spilt on a shirt and dog hair everywhere. These were not retouched out.

Being accepted by the artists and community was important to getting a great result in the photography. A favourite elder and artist at the gallery is Rosie Nangala Flemming, and she bestowed a skin name to me of ‘Napaljarri.’ The kinship system is important to understanding respect and protocols within the community and something I am still learning in this complex and diverse society.

In another interesting dot point, on one visit out to the centre, an Indigenous Art gallery owner from Paris was also visiting Yuendumu, and I was honoured to be invited by Didier Zanette to hold an exhibition titled ‘Face to Face’. My portraits of the artists hung together with their large paintings at Parcours des Mondes, one of the world’s largest tribal art exhibitions, held in the Fine Arts District, Saint-Germain-des-Prés, Paris. The idea for this book came about out of producing this selection for exhibition. Since then, it’s been four years in the making.

The surrounding landscape of Yuendumu and Nyirripi is rugged and immense. I’ve included photographs of this country amongst the portraits and paintings. I invite you to come on the journey with me to see the locations that were the inspiration for the Jukurrpa and paintings.