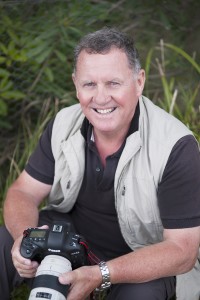 Always a keen photographer and observer of the world around him John was introduced to a new level of appreciation of the natural world through his participation at one of a Ken Duncan’s Coastal Exposure Workshops.

” I was amazed by Ken’s love and passion for photography and his boundless energy when it came to seeking out a better shot then an even better shot again. He was, and is, truly inspirational, his enthusiasm is infectious.” Since that first introduction John has taken his own photography to a new level. Over the last decade he has criss-crossed Australia, had repeated trips to Africa, travelled to North and Central America and Europe and the Middle East.

John recently travelled to Costa Rica with a small group of photographers and was able to capture the absolutely stunning  Hummingbirds and other wildlife. As well as wildlife, John enjoys sport and landscape photography. For his wildlife images, John has received a number of awards both International and Australian.